This page gives a brief overview over my research. For more technical details, see my publications.
In a nutshell: I am a theorist who worked mainly on modified gravity, Lyman-alpha observables, and small-scale (magneto-)hydrodynamic simulations. 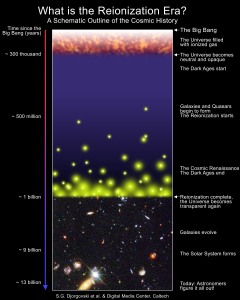 My research is roughly divided into two parts. Mainly, I am interested about the early Universe and its first galaxies and how we can use a particular spectral line (Lyman alpha) to find out about it.

This particular interval of time during the evolution of our Universe is the one we know currently maybe the least about. When were the first stars created? What were they like? How did the first galaxies form? What were their properties? These questions are difficult to answer since we are talking about a time which was ~10 billion years ago (see figure on the right).

A prime tool to probe this early epoch of the Universe is the Lyman alpha line since photons with this frequency can travel unhindered from the very distant galaxies to observers on earth. In addition, the shape of the spectrum can tell us a lot about the properties of these emitters (e.g., the dust content, velocity profiles, morphology…).

My task is to model the spectra using theoretical considerations and computer simulations and, hence, to try to understand what the observed spectra could mean in terms of physical quantities.

Part of my research is focused on Lyman-alpha (or Lyman-α, or Lyα) radiative transfer. Lyman-alpha is the first transition of hydrogen, and hydrogen is the most abundant element in the Universe! This makes the Lyα emission line (one of) the brightest in the observable Universe – and a prime tool for astronomers to study the first galaxies, how galaxies form, how they evolve, and so on.

One property of Lyα is that it is a so-called “resonant line”. This means a (neutral) hydrogen atom can absorb a Lyα photon, and emit it shortly after again. In fact this

process is so short that one says the atoms scatters the Lyα photon. Because there is a lot of neutral hydrogen inside a galaxy, Lyα photons usually scatter many times before they can reach us, the observers. Each scatter does not only change the photon’s direction but (mainly) due to Doppler boosting also the frequency of the photon. This escape path is shown in the animation on the right where I color coded the line based on the current frequency of the photon. The numbers to the bottom left show the distance the photon travelled (in pc), the number of scatterings, and the current frequency (in units of Doppler widths from line center).

Astronomers are very lucky that this process is happening because we can record the frequency distribution of the Lyα photons – and can in this way learn about the galaxy the photon originated from. This frequency distribution is also called a “spectrum” and up to today hundreds of Lyα spectra from different cosmic epochs are recorded (a number that will be boosted in the near future with cool experiments such as JWST). This allows to study how the first galaxies formed, and how they evolved.

My research – a bit more specific

My research is focusing on the formation of first galaxies and structures, the epoch of reionization, and how we can use Lyman-alpha spectra to probe these things. On these projects I work often together with Mark Dijkstra, my PhD supervisor.

Another interest of mine are (screened) modified gravity models and what imprints they could leave. Here, I work mainly together with David Mota, my second supervisor.

Generally, I like to work on the interface between observers and theorists. This involves, e.g., numerical simulations & modeling.

More details about my publications are found on a seperate page.